Escape Game – The Book of Spells

An “Escape the Room” type of game, where the players are given a limited amount of time to work together as a team so as to solve various riddles towards escaping from a technologically-enhanced room.

The Book of Spells is an “Escape the Room” type of game, meant to be played by a team consisting of two to three players. It differentiates from other conventional escape room games due to the heavy use of Ambient Intelligence and Augmented and Mixed reality technologies. By using such technologies, the system can achieve the closest possible thing to real world magic, a truly unique experience to a world still unfamiliar with the potential of AR and MR.

Storywise, the players are trapped inside an abandoned stone building that turns to be the lair of a witch, and they are given a short amount of time to work together as a team in order to find a way to escape.

Regarding the setup, projectors mounted on the walls are used to establish the theme of the room by projecting appropriate graphics such as stone walls, old books and paintings, bookshelves filled with enchanted potions and a locked wooden door. The walls of the room support touch-based interaction, while the users are equipped with Augmented Reality glasses in order to search for hidden clues.  Additionally, a technologically augmented custom-made piece of furniture with drawers is an integral part of the game, since it promotes interaction with physical objects. For example, via a ceiling-mounted projector it transforms to a wooden table, hosting magic ingredients and a cauldron, which is placed on top of the table via Augmented Reality. Voice interaction is also supported, while directed audio can be used to provide valuable hints that will advance the game. 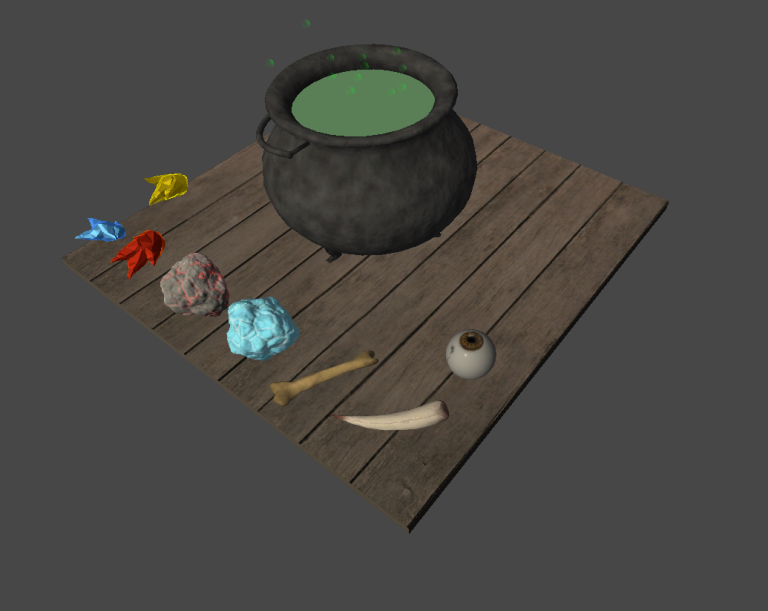 A virtual cauldron, which is placed on top of a table via Augmented Reality