A piece of interactive smart furniture for the living room, that builds upon the paradigm of surface computing.

A fully-functional prototype of a smart coffee table, along with a number of low – and high – level software components. The booTable incorporates several innovative features such as: (a) it is constructed by recycled and re-used paper parts; (b) it is designed to look as a modern piece of furniture. All technological parts (except the inevitable power cord) are carefully concealed in its body through the creation of appropriate design features; (c) it fuses alternative, highly versatile, input technologies; (d) it provides dual visual output, complementing the projection surface with a digital frame; (e) it is accompanied by two matching stools that also embed sensing technologies; (f) it introduces the concept of tabl-e-cloths (i.e., RFID-tagged printed canvas sheets) that act both as a tangible means for launching software applications and as the basic layer for creating mixed-reality interfaces; and (g) it comes with a custom-made middleware layer that supports application development in most widely-used programming languages and allows for concurrent access and use of the large variety of the available heterogeneous hardware components.

A number of applications were integrated to booTable:

Book & DVD e-nformation retriever: When the barcode of an item is placed over the scanner’s beam, related information is presented on the frame. If the information concerns a book, then by touching an on-screen button, the user can view related reviews on the table’s surface and, using the Phidget sensors, move to the next / previous review, scroll up/down and start/stop the vocalization of the presented information using speech synthesis. If the frame presents DVD information, then by touching on the trailer, it is presented on the table’s surface, along with video playback controls actuated by Phidget sensors.

Family Notes: An application supporting communication exchange among family members, aiming to “embed technology in the social practices of the home”. Each person is identified by a corresponding RFID card. When a card is placed on the table’s surface, all related messages appear. Users can interact with the messages using IR-tipped pens. Messages can be zoomed in and out, or arranged anywhere on the desktop – even in the photo frame. If a message is dragged over the trashcan, then it is deleted. A new message can be created by selecting a deck of empty notes. Users can use a wireless mini keyboard to type in text, or the IR pen to draw on the message’s surface, or select (multiple) recipients, including themselves (i.e., as a reminder). Photos can be attached to messages by touching the secondary screen.

Fuzzy Painting: A creative application that explores a number of non-conventional ways for creating abstract artistic illustrations. Through the tabletop sensors users can change the shape, size, grayscale color, alpha value and direction of the painting brush. By triggering the distance sensors, or by standing up and sitting down, the painting brush starts to move and paint automatically. The IR pens and IR-fingertips can also be used for creating free-hand drawings.

Chess Game: The game launches by putting a tabl-e-cloth depicting an empty chess-board with round-shaped “squares” on the table. The chess pieces are projected on the board. Players can use the IR fingertips or pens to play.

Table Jockey (TJ) Game: A game played through a tabl-e-cloth, illustrating a vinyl disk and several push and slider controls, simulating a DJ console. Various functions are supported, such as mixing sounds, applying effects, and affecting the balance, tempo and volume of sound clips.

Invaders Game: A Space Invaders-type action game offering both single- and two-player (cooperative and duel) levels. Players can employ any of the available sensors to control their spaceship, including the stool sensors. For example, in one of the two-player duel modes, in order to fire a missile against their opponent, players have to stand up first upon the termination of a countdown sequence.

Tabl-e-clocks: Tabl-e-cloths that illustrate various strange types of clocks with no visible hands, serving both a decorative and a functional role. When such a cloth is left on the tabletop, the hands are projected and continuously updated. Some examples include a counter-clockwise clock, as well as Salvador Dali’s “La persistencia de la memoria” painting, where the famous distorted clocks always show the current time.

Smart light: An example demonstrating (simplistic) user task awareness. If a user is sitting on a chair and a book already exists (or is placed) on the tabletop, then when the book is removed, it is assumed that the user wants to read it and the floor lamp behind the user’s chair is turned on.

Mobile phone hub: An application allowing booTable to act as a Bluetooth mobile phone hub. If the user leaves an RFID-tagged phone on the surface while it is ringing, then the call is automatically answered providing hands-free functionality. If a user’s image is associated with the specific number, then it is presented in the frame. When the phone is not active, an interface is projected on the tabletop allowing dialing a number, navigation in call history and access to a personal phone directory.

Dual Screen Storyteller: An easy to use (and to create) story book application for young children. Story books are MS PowerPoint presentations containing text, images, animations, etc. In the comments section, storybooks can contain directions, written in a very simple scripting language, instructing the program when and in which of the two available screens a slide should be presented. This way, for example, the frame can display images or animations related to the current page, the previous page, the definition of a term, etc. When a story-related RFID-tagged object is placed on the table, the slideshow starts. Users can move to the next/previous page by touching the right or left side of the table respectively, or start/stop the (synthetic speech) narration of the text by gently hitting the table’s surface. 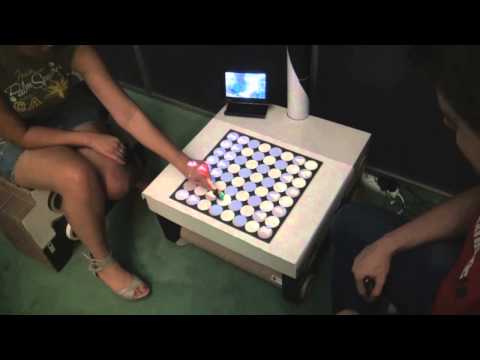 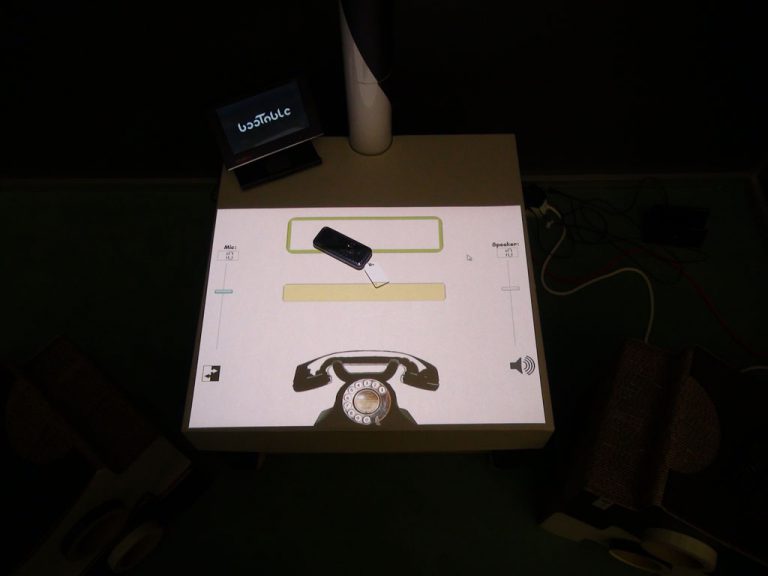 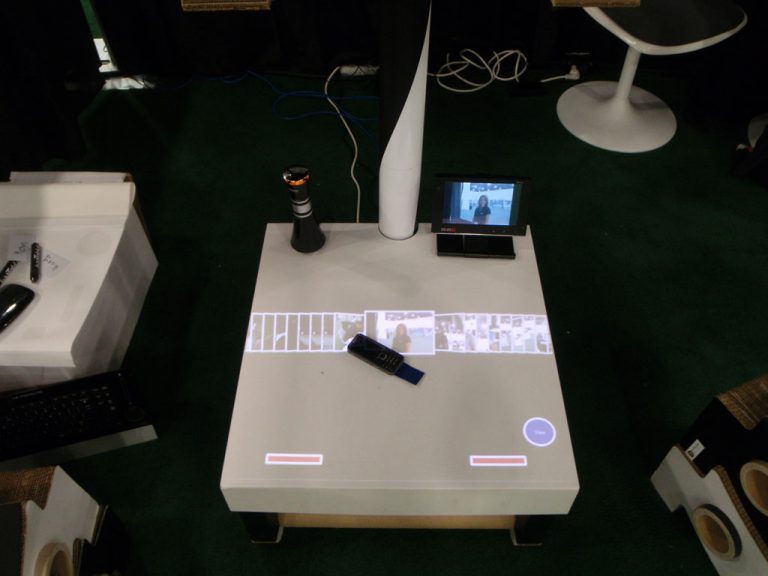 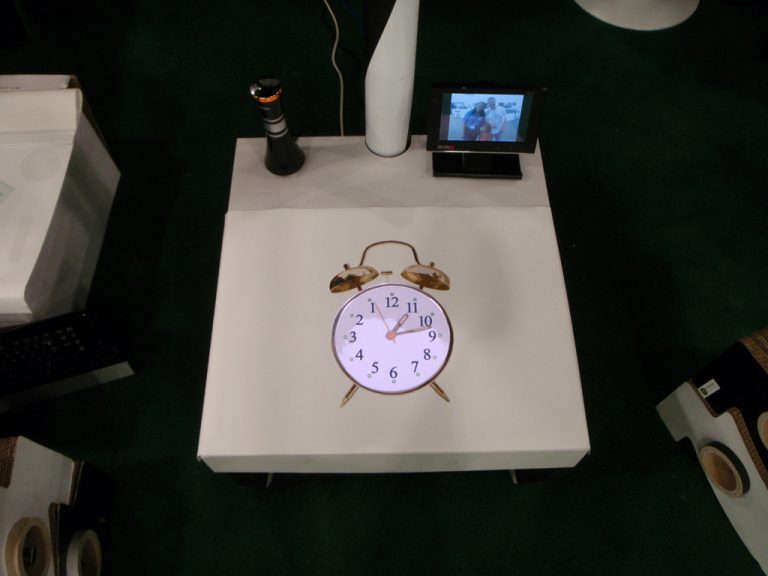 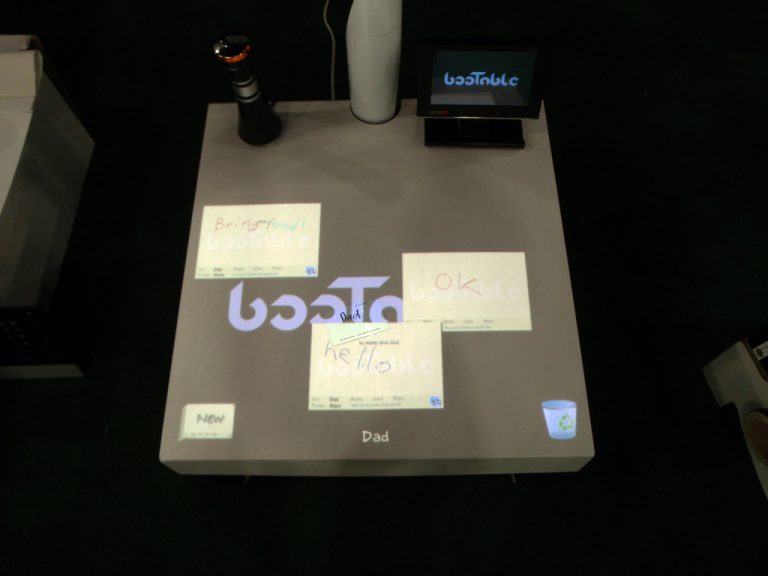 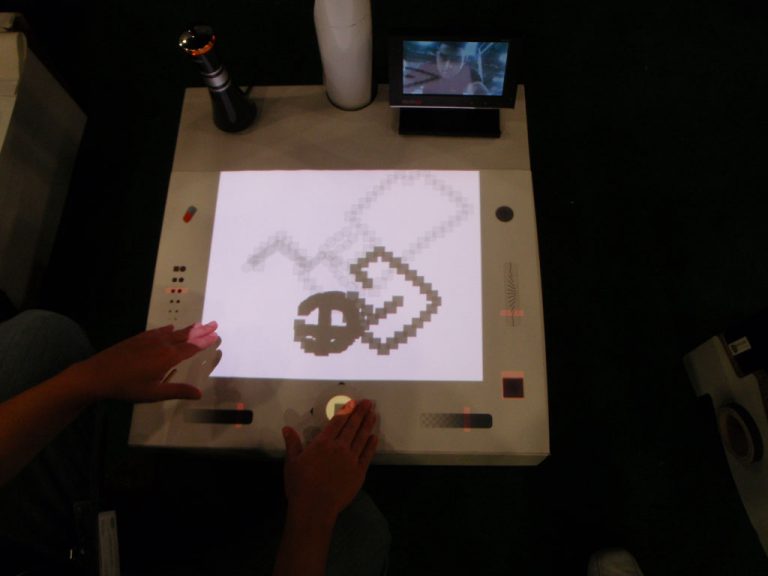 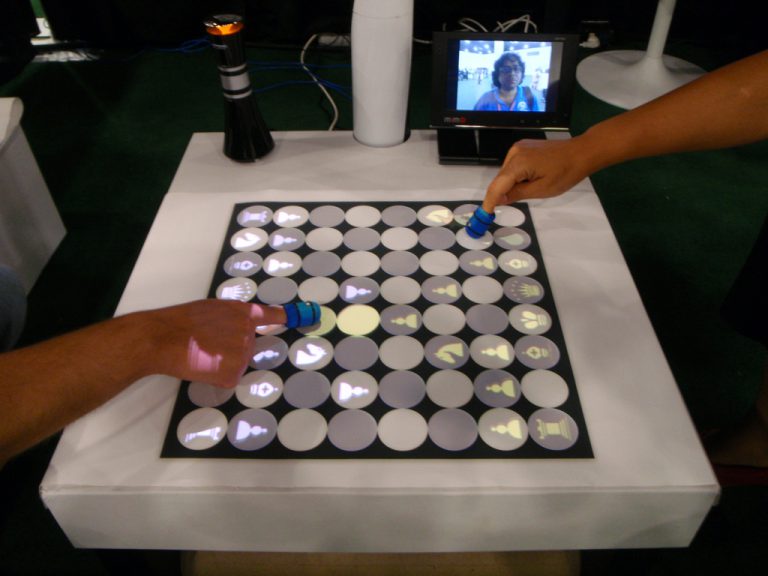 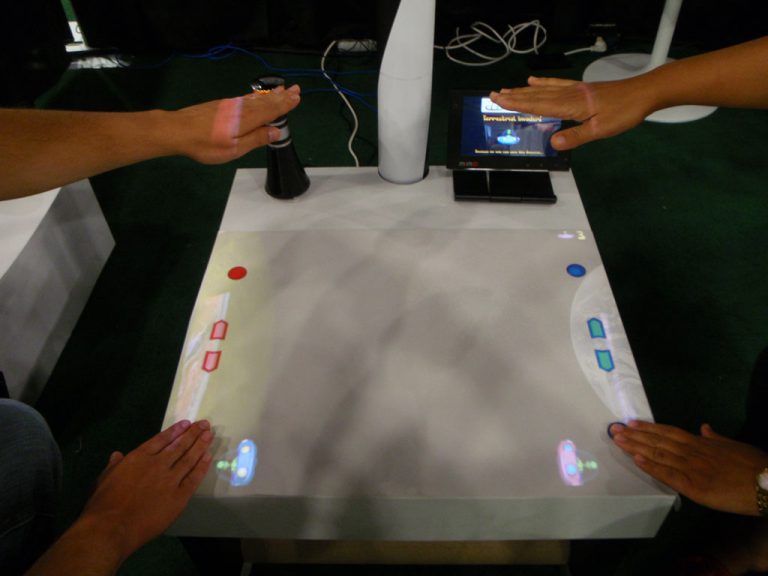 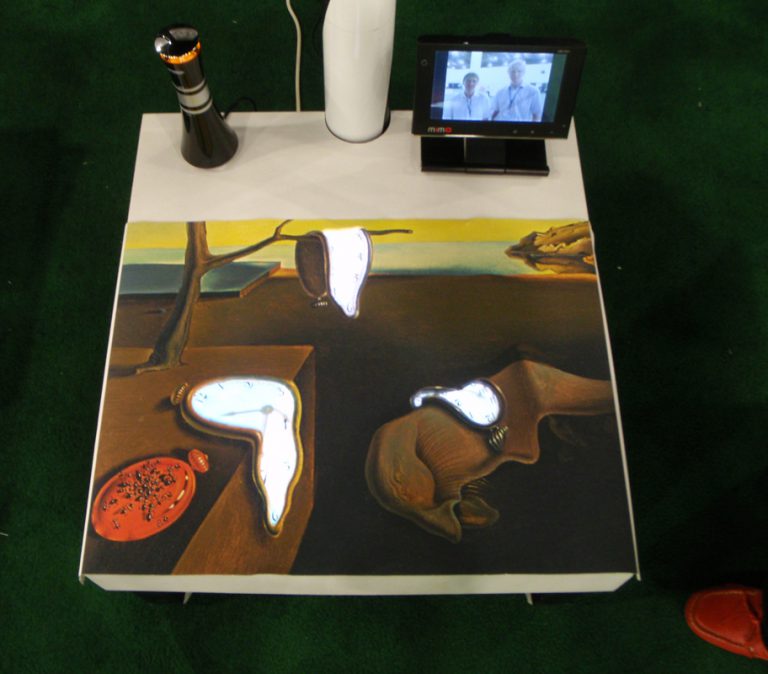 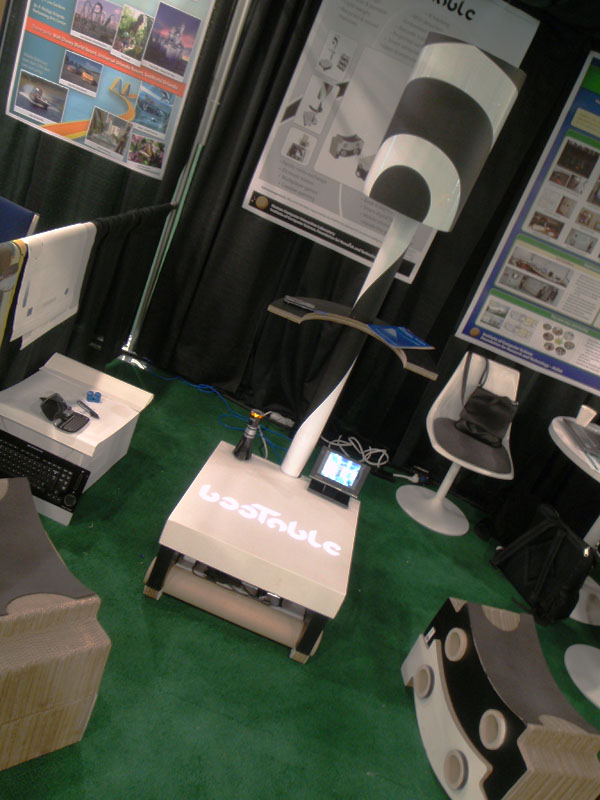